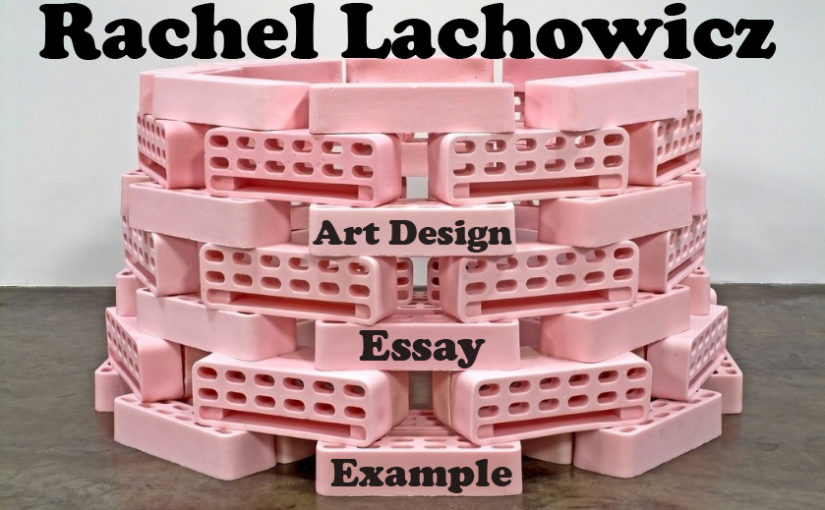 Known as lipstick feminist Rachel Lachowicz is also a renowned sculptor who has been working in the Post-Modernist period with all implications that follow from it. Lachowicz works with various media ranging from glass and enamel to metal to wax and lipstick eclectically mixing recent minimalist, abstraction, and pop art tendencies with her own artistic vision.

Lachowicz began her work with references to Dadaism and Surrealism with their tongue-in-cheek works. In the 1989 Molotov cocktail, she exhibited glass bottles with the eponymous device on a metal serving tray. The idea behind it might be as follows: just as incendiary liquid ignites strips of canvas in glass bottles the artist can serve as a sparkle that will blow off the existing notions of art.

In the 1991 High Heels, Lachowicz plays with a Surrealist tactic of exaggerating a certain aspect of an object. Taking pretty shoes the artist elongates its heels up to a wondrous length. Just like Oppenheim contrasted the sensual qualities of fur and hot beverage in Breakfast in Fur, making them cancel each other, Lachowicz exaggerated the symbol of female sexuality – high heels – so much that it became ridiculous.

After Marcel Duchamp’s Fountain, many artists interpreted the subject of urinals. Sherrie Levine created a luxurious item by making her Fountain out of polished bronze. In the 1992 Untitled Urinals, Lachowicz cast three items in lipstick, wax and hydrocal. In contrast to Duchamp, Lachowicz hangs her three urinals on the wall. Together with bright red color the urinals uncannily resemble open mouths making it “in the spirit of cross-gender parody” (Melrod 19).

“Surrealist/Minimalist hybrid installations” continued into the 1990s with the 1992 Broken Glass featuring a row of glass slippers next to one pair crashed into a pile of glass. In 1993, Lachowicz made a parody to Jeff Koons’ stainless steel rabbit. Called Burnt Bunny, a wooden bunny of more modest size was made, taken pictures of, and set afire. The charred remnants also were photographed.

Realizing that artistic world is still male dominated Lachowicz often reappropriates the famous works by male artists by showing them in a feminine aspect or by using “feminine” materials such as lipstick and eye shadow or face powder. For example, to Yves Klein’s blue Venus she responded with a bright red male torso recast in lipstick and plaster called Red David.

While Klein stayed unaware of gender implication in his work, Lachowicz fully realized her goals and her mission (Melrod 18). Her dialogue with Klein was continued through her work Red Not Blue.

Thus, Lachowicz opposes male objectification of women by reversing it. Now she makes men take an unusual role of the objects of desire. Red lipstick intensifies the message and the impression. Habitually used by women as a means of seduction and preening up, lipstick on male genitalia shows another angle of sexualization.

Lipstick and other cosmetic products assist Lachowicz in reappropriating and placing in another context works by other artists. Thus, in 1991, she responded to Carl Andre’s squares with a replica made of red lipstick and wax; in 1992, Lachowicz responded to the huge sculptures Weight and Measure by Richard Serra by making a small-scale cube Sarah.

Again, it was cast in red lipstick and wax. “The strategy of replacing hard with soft materials, and reveling in the strength of a seemingly ductile medium has been claimed as a Post-Minimalist Feminist strategy: investing forms seen as authoritative and industrial with a pliant, corporeal frailty” (Melrod 18).

However, it produced absolutely different effect on the viewers. In case of Serra’s sculptures their enormity and heaviness produced an awe and fear; in case of Lachowicz the softness of the material was visible and no threat of violence was felt.

Later Lachowicz’s fascination with lipstick gives way to one with eye shadow. Beginning in the early 1990s with color charts made of multicolored eye shadows she moves to portraiture. In 1998, Lachowicz made Chuck Close’s Self-Portrait out of dark colored eye shadow.

In 2000s, it continued with exploration of eye shadow possibilities. The 2013 Cosmos features a large plexiglass filled with black eye shadow presenting the blackness of the space with spots of multicolored smears meaning stars and planets (Melrod 21). The construction of an image out of small make-up containers of different colors is similar to Chuck Close and Roy Lichtenstein with their usage of small dots.

In the similar vein, Lachowicz reproduced in eye shadow Poppy Flowers by Andy Warhol. She made them in many colors “from Periwinkle Blue to Viridian Green to Quinacidrone Rose” (Melrod 21). The irony of this work is that while Warhol’s pictures were manufactures in numerous copies, Lachowicz’s “replicas” are unique.